Hulu is finally adding downloads to its streaming service, years after Netflix and Amazon Prime Video did the same. The company had promised over a year ago that it would soon roll out support for offline viewing, having developed a way to include advertising with its downloads. However, the downloads feature launching today is only available to iOS users on Hulu’s “No Ads” plan, the company says.

When reached for comment, Hulu couldn’t offer a timeline for when support would arrive on the ad-supported version of Hulu or whether those plans had been shelved. The company did say its focus was shifted this summer to mobile upgrades, including the interface update and live guide improvements.

At launch, there are “thousands” of TV shows and movies offered for offline viewing, including Hulu Originals like “The Handmaid’s Tale,” “Shrill” and “The Act,” as well as series like “Family Guy,” “Desperate Housewives,” “This Is Us,” “How I Met Your Mother” and “ER.” In fact, the majority of the content on Hulu is available for offline viewing, as its content agreements were already negotiated to allow for downloads.

In a few cases, however, only past seasons of a TV show will be offered for download.

To access the content, Hulu is adding a new “Downloads” tab at the bottom of the screen. You also can browse for shows and movies to download by clicking on “See What’s Downloadable,” says Hulu. 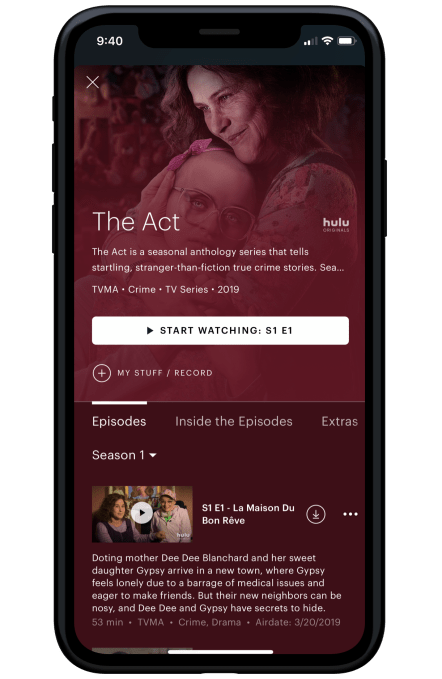 You also can search for specific titles to see if they’re offered for offline viewing. If so, a download icon will be displayed on the title’s details page.

Viewers will be able to download up to 25 titles across five devices, and will have up to 30 days to watch the downloaded content. After starting playback of downloaded content, viewers have two days to finish before the download expires. If you didn’t finish watching, you’ll have to renew the expired download while online — assuming it’s still offered on Hulu.

The feature is initially available for iOS users, but Android users will get the same option “soon,” says Hulu. 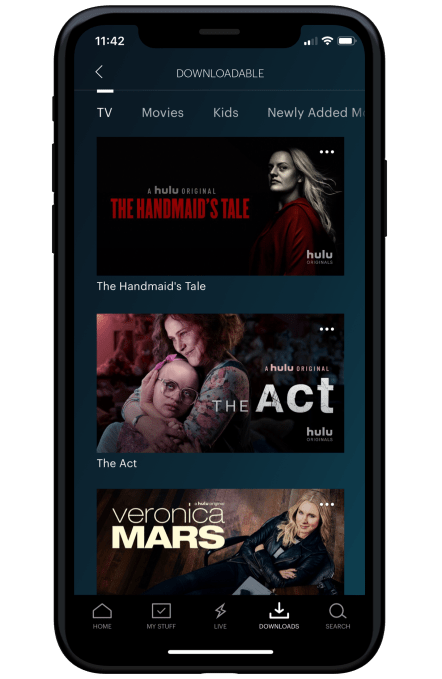 Hulu is aware that it’s extremely late to add support for offline viewing.

Most consumers today expect there to be a way to download content, ad-free, for those times they want to watch TV shows or movies without access to the internet — like when traveling by plane or underground train, for example.

Amazon Prime Video added downloads to its service way back in 2015, and Netflix followed the next year. Even smaller players in the streaming market have since added downloads, like CBS All Access did last year, and Showtime the year prior.

Hulu had barely even touched on the topic, until recently. At the 2018 Upfronts, Hulu CEO Randy Freer told advertisers that a “downloads” feature would arrive sometime in the “2018-2019 Upfront season,” which wrapped in August 2019. He said the feature would allow viewers to download shows with ads included, which would benefit advertisers.

Since then, there’s been no news as to why the option hadn’t yet arrived or why.

One possible explanation some people may point to is Hulu’s big executive re-organization last summer, which saw the departure of its chief content officer and its SVP of Experience, among others. But the re-org didn’t really involve Hulu’s technical team, so that shouldn’t have had a significant impact. However, the company did also launch a revamped version of its consumer mobile app this summer — a change that Hulu may have decided should be prioritized ahead of adding the new Downloads functionality.

Hulu could also be struggling with the technical challenges of ad-supported downloads, perhaps. Making those ads work properly and attributed correctly could require a longer time frame than originally planned. And Hulu may even be reconsidering if such a product is necessary, as long as on-demand downloads are available.

The downloads feature will arrive on iOS today, but you’ll need to update your app to gain the option. You’ll also need to be on the $11.99 no-ads tier of Hulu’s service, if you weren’t already.