Pico, a New York startup that helps online creators and media companies make money and manage their customer data, announced today that it has launched an upgraded platform and raised $6.5 million in new funding.

In a statement, the startup’s co-founder and CEO Nick Chen said Pico helps creators with their two biggest problems — “how to make money more easily and how to get to know your audience better” — while also giving them control over their two most important assets, namely “your brand and the relationship to your audience.”

The company provides a long list of different tools, including landing pages, pop-ups to collect email addresses, paid newsletters, subscription paywalls, tiered membership programs, recurring and one-time donations and video revenue tools. With version 2.0, the company says it’s bringing all these features together with a unified data structure, so that customers can see “who is paying for what content and where they came from” in one dashboard.

Via email, co-founder and President Jason Bade (pictured above with Chen) pointed to “the power of our CRM to help creators understand their audience” as the most significant upgrade, suggesting that this “makes Pico the operating system for the creator economy.” 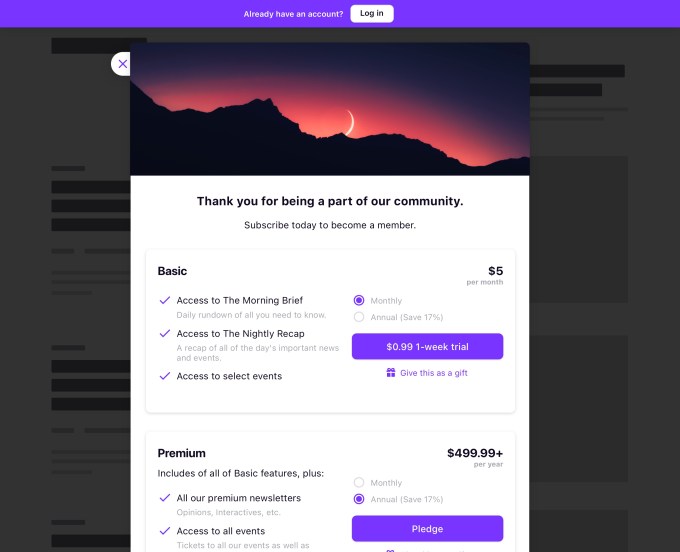 “A creator can’t scale a business without the proper tools,” Bade continued. “Take email capture, that is the first step in audience development. But what next? You need data and a CRM to handle it. 2.0 upgrades every part of Pico to rearchitect it for the scalability and extensibility that the creator economy demands.”

Pico also said it will be launching an API soon to support integrations with different parts of the platform.

Apparently, the company has seen its customer count increase nearly 5x in the past year, with customers including The Colorado Sun, Defector Media and The Generalist. And it recently recruited Rodolphe Ködderitzsch (who held a number of roles at YouTube, including global head of partner sales) as its chief revenue officer.

The new funding was led by Ann Lai at Bullpen Capital and brings Pico’s total funding to $10 million. Other investors include Precursor Ventures, Stripe, BloombergBeta and Village Global.

Building customer-first relationships in a privacy-first world is critical