Charter Communications is really excited to tell you about all its new broadband network investments.

“Increasing Flagship Broadband Speeds; Giving Customers More For Less,” is the title of the company’s latest announcement on this topic. The second-largest cable company in the US has increased its standard download speed from 60Mbps to 100Mbps—”at no extra cost to our customers”—while providing speeds of 200Mbps or 1Gbps in some markets. Gigabit service is available in “Oahu, Hawaii with additional markets to be launched in the weeks ahead,” Charter said. 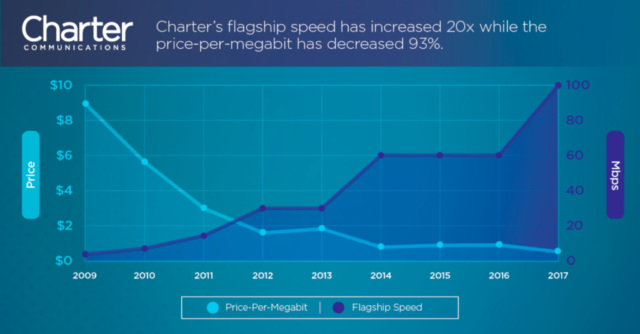 The amazing thing is that Charter is doing all this despite the Federal Communications Commission’s net neutrality rules and related Title II regulation of ISPs as common carriers. In July, Charter told the FCC that the “broad and vague prohibitions” in the rules “have caused broadband providers to reconsider innovations and investments out of concern that regulators could squelch, or force significant modifications to, those ventures after funds had been expended.”